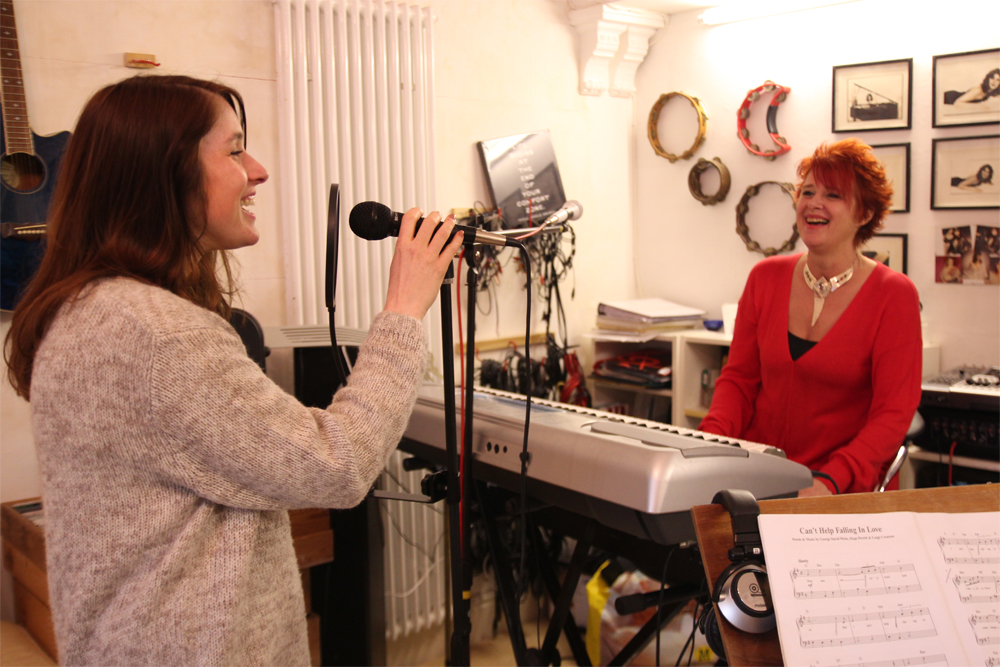 “If you spread your dreams before you, like a stairway to the sky,no star that you reach for, will ever be too high”

The Cool School of singing now on Park Avenue in Hull was founded and structured by Zanna Gregmar  in 2004 to teach Performance Skills, Self Esteem and Confidence in young people of all ages 😉 from 5 to 80 years old…

Zanna specialises in vocal development and care, to bring out the personality of each singer, to build and structure the voice from the very basic level into a tool which can be used with relaxed control and confidence.

Learning to look after your voice properly, and use it correctly regardless of whether it’s in a perfect healthy condition or suffering from overuse or ill health is very important.

There are so many factors which make a good singer: Proper Breathing, Voice support, Resonance, Tuning, Timing, Phrasing,Diction, Intensity, Use of Power and Range and the ability to make a song your own through improvisation, Feeling and use of Dynamics, and learning how to put all this into work for you so that you can sing/present a song in an engaging way.

We cannot promise to turn you into a star  but can certainly help you to become a confident singer and to “Be all that you can be” on stage or in the shower, with your voice developed to the peak of your ability…

Zanna’s Studio is based in Hull on Park Avenue

*Zanna Gregmar is a singer/songwriter/musician and Broadcaster with some 40 years of experience in the music industry as a recording, performing and touring artist and broadcaster in Europe and USA.She has successfully helped many students on the road to achieving their dreams in a safe and positive environment as a teacher in Sweden, Spain and USA and is now offering her skills in England.*

I would welcome the opportunity to earn your trust 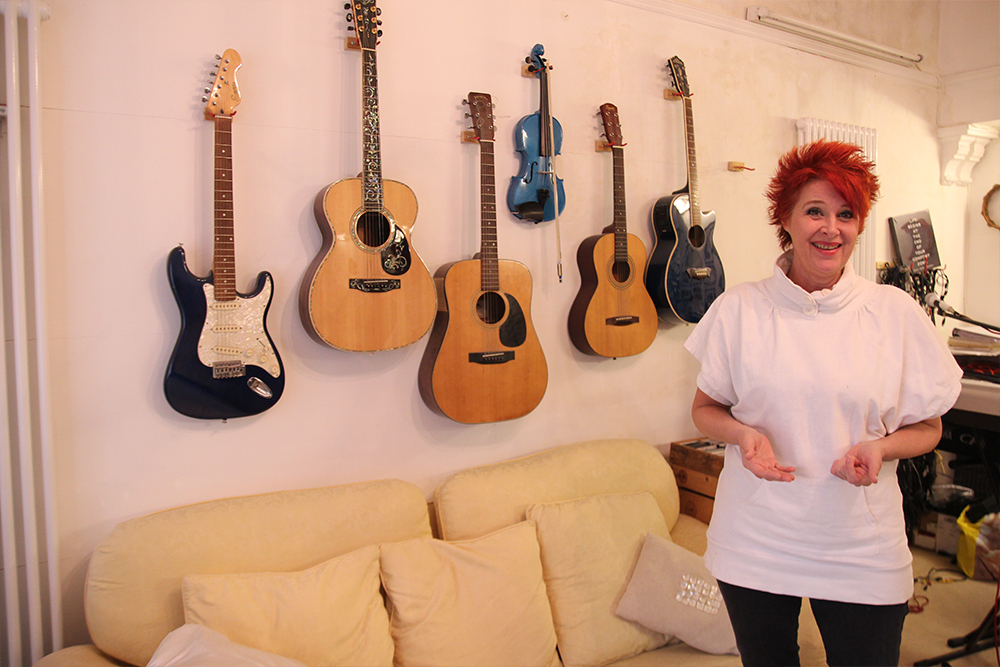 She caught her first glimpse of sun while visiting the sign of Leo in the year of the snake into an artistic family in Landskrona Sweden.

From a long line of respected artists and musicians,her mother a classical ballerina, model and designer, and her father an actor and dancer & dance teacher,there was never any question of her future life and passion. She started entertaining professionally as a young teenager in Sweden, working first as a troubadour singing folk music, then joining various show bands with emphasis on vocals and harmony work and touring extensively in Europe. In the lmid 70:s she was signed to BUK records in London and during this time started collaborating with artists such as Tony Sheridan.

She was signed by EMI-Music Publishing in London in1976. She worked as a session singer and collaborated and recorded with amongst others; Bernie Marsden, (Whitesnake), Raphael Ravenscroft (Gerry Rafferty) and Nicky Moore (Samson).

She played in various piano bars such as the Café in Kensington for a year and the Intercontinental Hotel in London for a year, and also the biggest piano bars in Sweden and Denmark. Back in Sweden she started the Heavy rock band “ZANNA” with her brother Bolle Gregmar on drums, Rolf Jonsson Guitar, ( later replaced with Patrick Ohlsson and Sune Martinell on Bass.

She joined Bill Lovelady’s band when he had a no 1 hit for Twenty -two weeks in Sweden with”One more Reggae for the Road”.

After the tour she teamed up with British multi instrumentalist / guitar hero Ollie Halsall who joined ”ZANNA” the heavy rock band and toured Sweden. Zanna and Ollie joined Kevin Ayers Band in the early 80: s based in Spain, recorded for CBS in New York. Toured Spain. Zanna became known as the first female keyboard player in Rock to perform on Spanish stages. European tours followed as well as the recording of music for Kevin’s film ”Percussion”, and an album ”Jack of Diamonds and the Queen of Pain”.

A TV special and some concerts with John Cale (Velvet Underground) and Andy Summers(Police) in Spain.

Zanna and Ollie teamed up with some Spanish top musicians, Javier de Juan and Manolo Diaz and formed group ”Cinemaspop”. Recorded two albums for WEA and had 4 top five hits, with ”Zorba the Greek”, ”We love you Marilyn”, ”Following the Blonde” and ”Let’s go to the movies”.

She collaborated with Top artists ”Mecano”, ”Azul y Negro” and Flamenco-Rock star Manzanita on record, TV and on stage.She did a multitude of different TV and radio shows as well as concerts.

In 1985 she moved to Hollywood, California where the career got temporarily interrupted because of the arrivals of Two Lovely Daughters and her decision to study psychology. She then proceeded to study Hypnosis with the thought of specialising in the creative and artistic field such as motivation, goal focus, concentration, creativity, positive thinking removing writers block, stage fright and other fears and phobias etc. and graduated as a clinical Hypnotherapist in 1994.

However she continued to write and record music and collaborated with amongst others Ric Olsen (Berlin), ”Rockwell” (Somebody’s watching me), ”Maestro Alex Gregory”. She gave private lessons in Singing and Guitar, and Hypnosis for stage, performance and creativity related problems. She wrote a collection of Lullabies for babies, siblings, parents and other folk ”Suite Dreams”, which she recorded together with Tom and Steve Fowler known from Frank Zappa’s band.

She went back to her native Sweden in1996 became politically involved with the Hague convention, started an international support network ”Children’s Rights in the Hague Convention” held a seminar for the government about the practical implications of the Hague Convention, held many lectures about the subject, was frequently featured on radio and TV interviews and wrote and recorded a theme song in support of families suffering from the reality of the Convention : ”Tears of a child”.

She had her own very popular TV-shows on local TV,sang and lectured about positive thinking, hosted many functions, performed singing her own songs and playing the piano, sang standards with a swing band, started and ran a school of singing and performing for children and teenagers for three years , arranged several song and dance shows, plus taught music on both primary and high school level.

In June 2003 she finally returned to her beloved England to once again pick up the pieces and perform a variety of songs from the different paths and places in her life.

In 2004 Zanna started a new company for creative pursuits and its first project ”The Cool School of Singing” for all ages starting at six and upwards.(every Saturday during school terms). Private lessons are also offered. In June 2005 she also started an adult version of ”the Cool School” on Tues evenings in Cottingham which was enthusiastically received by a crowd of aspiring performers and hobby singers of all ages.

Zanna joined Mike Greaves and the Lonesome Too, singing close harmonies, in 2008. Currently Zanna’s recording an album of some of her previously unrecorded rock songs with Terence James Dunne (from Ernest and Man Made Noise) and Brian Chapman.

Throughout her career Zanna has never missed an opportunity for a singinglesson with the best teachers in the area wherever she happened to find herself and has thus studied the methods of Anne Peckham -Berklee College of Music California, Brett Manning – Singing Success in Nashville, Mark Renk (teacher to many of the stars such as Christina Aguilera) Roger Kain of Brighton Institute of Modern Music and more.